LOS ANGELES – As Black Friday approaches, Walmart workers are standing up to the country’s largest employer – even in the face of widespread illegal retaliation against them.  Workers and community supporters announced today increased activity and calls for change, launching a petition to President Obama and unveiling an online portal that lets associates sign-up for community support. Workers are part of the national organization OUR Walmart, which is calling on the company to use its $17 billion in profits to pay a minimum of $25,000 a year for full time work and to end its illegal retaliation against its workers.

More than 100 unfair labor practice allegations have been filed against Walmart with the National Labor Relations Board (NLRB) for illegal firings and disciplinary actions against workers who have participated in legally protected strikes and to deter them from speaking out. 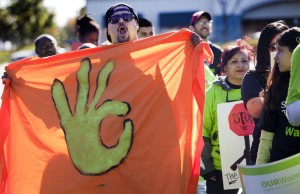 During a press call as a two-day strike and civil disobedience is underway in Los Angeles, workers, community supporters and economic policy experts outlined the growing nationwide movement to demand Walmart end illegal retaliation and improve jobs. On the call, Anthony Goytia, one of many L.A.-based Walmart workers taking part in the two-day strike, discussed why he is risking his job to end the retaliation that Walmart workers face when speaking out.

“I know that I may be fired for speaking out today, but Walmart executives and the country need to hear about what’s really going on at our largest employer,” said Goytia. “I’m on strike today because Walmart’s retaliation against workers is illegal and it’s wrong.  We won’t be silenced.  Change at Walmart is too important to our families, our co-workers and our country.”

Barbara Gertz, a five-year Walmart employee from Colorado, pointed to a new website, www.associatevoices.com, which allows associates to step forward with their stories about the reality of working at Walmart and ask customers and community members to support them by holding Black Friday events at their stores. In less than 24 hours after beginning to promote the site, requests from associates across the country have poured in. Already, workers in more than 90 cities have requested a Black Friday rally at their store.

“Associatevoices.org provides a space for associates to raise their concerns and see that they are not alone. OUR Walmart and our supporters are standing up for 1.3 million associates in this country who aren’t getting the hours they need and are nervous about Walmart’s aggressive retaliation,” said Gertz. “The fact that the website has taken off as it has, in such a short period, is a clear sign: whether online or on the picket line, our concerns are widespread and our voices and support are only growing louder and stronger.”

Workers, supported by various organizations, also announced the launch of a petition calling on President Obama to meet with courageous workers risking their jobs by protesting against Walmart. Inspired by the activism of Dr. Martin Luther King Jr. and his dream of good jobs and freedom, workers like Charmaine Givens-Thomas noted that Walmart’s low-wage business model, erratic scheduling and illegal retaliation hold America back from realizing Dr. King’s dream.

“As a 60-year-old African American woman who marched with Martin Luther King Jr., I want to promise my grandchildren that they will have a brighter future than I had. I can’t do that,” said Givens-Thomas in the petition. “More and more of us are struggling to nourish our children and pay our bills. It’s time the president met with Walmart workers like me who are standing up to Walmart and hear about the reality of scraping by on Main Street.”

The call took place as more than 80 community leaders and clergy members prepared to join workers at a rally at the Chinatown Walmart, in what is slated to be the largest-ever act of civil disobedience against the mega-retailer. Dozens, including Rev. Dr. Sarah Halverson, pastor at Fairview Community Church, are prepared to be arrested in response to Walmart’s illegal retaliation and low wages.

“I stand in solidarity with the brave Walmart workers who have walked out and gone on strike as well as those who have been intimidated, fearful they’ll lose their jobs if they speak up,” said Rev. Dr. Halverson. “They are not alone for they stand with thousands of clergy and interfaith communities across the country as we pray for their strength and find inspiration in their actions. I am thankful for these workers and I pray that Walmart will respect its employees and show them the dignity they deserve with fair pay and a commitment to refrain from intimidation.”

Throughout much of the recovery to date, the vast majority of jobs being created pay low wages, according to research by the National Employment Law Project. To make matters worse, lower-wage and middle-wage jobs have seen significantly larger declines in their real wages during the recovery than higher-wage occupations, a separate report by NELP shows. Another study shows that improving retail wages to a minimum of $25,000 would lift tens of thousands of families out of poverty, add to economic growth, increase Walmart’s retail sales and create more than 100,000 new jobs.

“The research on raising retail wages is clear – employers benefit from taking the high road, workers and families spend the additional money in their pockets and our economy as a whole strengthens,” said Jack Temple, policy analyst at NELP. “Walmart has a choice. It can take steps to improve the lives of its workers, customers and economy, or continue to force U.S. taxpayers to bankroll its low-wage business model.”

For more information on Black Friday protests, photos and live-streams of events, visit www.BlackFridayProtests.org and follow the conversation and see photos at @ChangeWalmart, #WalmartStrikers and changewalmart.tumblr.com.

In NYT Ad, UFCW International Calls for Summit on Justice