Fired up about management intransigence at the bargaining table, members of United Food & Commercial Workers (UFCW) Local 400 yesterday voted overwhelmingly to authorize a strike against Giant.

Their current contract originally expired on October 31st. It was extended for two weeks and has since been extended through December 20th, while bargaining takes place on a new agreement. Today’s vote does not mean that a strike will occur, but it sends a strong single to Giant that members will do whatever it takes to get a fair contract. 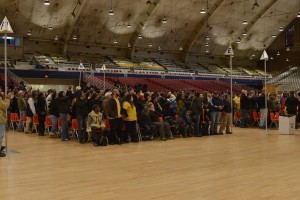 Giant and Safeway members voted to authorize union leadership to call a strike if necessary by a standing vote. Photo by Joe Coffin/Page One.

“Today, our members put Giant on notice that it is long past time to come to the table with a proposal that provides them with the security, respect and dignity they have more than earned,” said Local 400 President Mark P. Federici.

“We’re the ones making all their money and it’s about time they recognize that and start respecting us,” said Tasha Schrantz, a Local 400 member serving on the Bargaining Advisory Committee who works at Giant #749. “Now more than ever, we have a stand up together because actions speak louder than words.”

“We need to keep this momentum up, we have to stand together and we as union members need to actively support our decision by participating in store actions,” said LaWanda Nedd-Kea, a Bargaining Advisory Committee member who works at Giant #140.

“It’s our members whose hard work, unmatched productivity and outstanding customer service make Giant so profitable and the dominant grocer in the Washington, D.C., metropolitan area,” Federici said. “All our members ask of management is a fair deal that reflects all they contribute to the bottom line. No one wants a strike, but if that is the only way to get a contract providing living wages and health and retirement security, that is what we will do.”