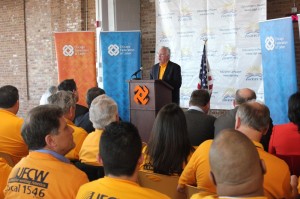 “Now is the time to pass comprehensive immigration reform – not next year or the year after but right now.  We can no longer accept an immigration system that breaks up families, harasses workers, and deports people who are simply trying to achieve the American Dream.  We can no longer be a nation that turns away aspiring citizens.

“For centuries, immigrants have come to America’s shores with the dream of making a better life for themselves and their families — from Ellis Island to the Florida Keys to the Rio Grande.  But for today’s immigrants, this dream has become a nightmare. Young adults who were brought here as children and have grown up in America—the Dreamers—still do not have a clear path to citizenship.  Workers face discrimination, abuse, retaliation, and sometimes worse.  Families are unable to reunite.

“Our immigration system is obviously broken. But worse than that, it flies in the face of our values as a nation.  So we must reform it.    No one is better to lead that reform than the labor movement.  It is the workers we represent who are most victimized by our current immigration system.

“For the UFCW, this issue hits close to home.  We remember the ICE raids in 2006 where our members were treated like criminals.  We remember hearing the stories of workers terrorized just for doing their jobs.

“Other unions have suffered similar experiences, as Wild West immigration enforcement has become the rule instead of the exception.  So as a movement, we are as united as ever to make comprehensive immigration reform the law of the land.

“The UFCW is joining our allies in the labor movement and in our communities to mobilize our members in support immigration reform that includes:

“But most of all, we want an immigration system that gives immigrants hope, not fear.  We want to be a nation that builds dreams, not border fences.  We want the families of immigrants to be united, not divided.  We want immigrant workers to have rights, not wrongs.

“America has always prided itself on being a country where anyone who is willing to work hard and pursue their dreams can find success.   We must live up to that ideal. We must pass comprehensive immigration reform.”

The United Food and Commercial Workers International Union (UFCW) represents more than 1.3 million workers, primarily in the retail and meatpacking, food processing and poultry industries. The UFCW protects the rights of workers and strengthens America’s middle class by fighting for health care reform, living wages, retirement security, safe working conditions and the right to unionize so that working men and women and their families can realize the American Dream. For more information about the UFCW’s effort to protect workers’ rights and strengthen America’s middle class, https://www.ufcw.org/, or join our online community at http://www.facebook.com/ufcwinternational and  www.twitter.com/UFCW