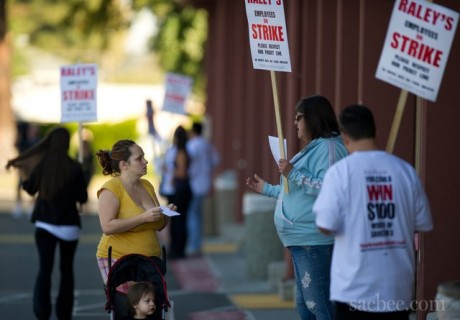 Following months of intense negotiations, workers from UFCW 8-Golden State and UFCW Local 5 have been forced on strike against Raley’s supermarket chain.

Nearly one million union grocery workers and their families across the country count on grocery jobs that provide meaningful benefits and a paycheck that can support a family. We cannot allow Raley’s to lower standards for working people in Northern California. Our full union stands in solidarity with the UFCW members standing up to keep grocery jobs middle class jobs.

Workers are fighting back against the company’s unlawful implementation of contract proposals and lowered job standards that were put in place without the input or approval of union employees. Workers have also filed unfair labor practice charges against the company, citing violations of laws prohibiting harassment and intimidation of union members, circumventing the union’s authority as a bargaining agent, and “regressive bargaining” — submitting proposals that are worse than previous offers.

The strike affects more than 7,000 workers in Northern and Central California .

UFCW 8-Golden State and UFCW Local 5 have been negotiating with Raley’s (which owns Bel Air and Nob Hill stores), Safeway/Vons and Save Mart/Lucky for more than a year, seeking agreement on new contracts for grocery workers in Northern and Central California. While an agreement was ratified with Save Mart/Lucky and negotiations are continuing between Safeway/Vons, Raley’s management has been bargaining in bad faith since contract negotiations began 15 months ago.

The United Food and Commercial Workers International Union (UFCW) represents more than 1.3 million workers, primarily in the retail and meatpacking, food processing and poultry industries. The UFCW protects the rights of workers and strengthens America’s middle class by fighting for health care reform, living wages, retirement security, safe working conditions and the right to unionize so that working men and women and their families can realize the American Dream. For more information about the UFCW’s effort to protect workers’ rights and strengthen America’s middle class, https://www.ufcw.org/, or join our online community at http://www.facebook.com/ufcwinternational and https://twitter.com/UFCW.