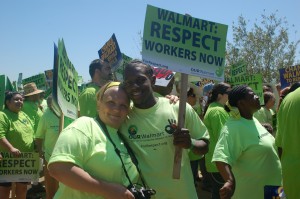 For Live Updates and Photos: Black Friday protests across the nation throughout the day, visit: www.BlackFridayProtests.org
Follow on Twitter: @ChangeWalmart; @ForRespect; #WalmartStrikers

(USA) – Calling for better jobs, Walmart workers and community supporters across the nation are holding 1500 protests against the mega-retailer today, in one of the largest mobilizations of working families in recent history. As part of the protests already underway, workers, faith leaders and community supporters are risking arrest in at least nine major metropolitan cities, outraged that with $17 billion in profits, Walmart continues to pay many workers poverty wages. Workers and supporters are calling for an end to illegal retaliation, for Walmart to publicly commit to paying $25,000 a year and to provide more full-time work.

Workers and supporters are set to take peaceful civil disobedience in major cities from coast to coast, including Los Angeles, Chicago, the Bay Area, Seattle, Dallas, Sacramento, Secaucus, Minneapolis, and Washington, D.C. The group has been emboldened by revelations from Walmart’s CEO that as many as 825,000 workers are paid less than $25,000, while the Walton family’s wealth totals over $144 billion – equal to that of 42% of Americans.

“We refuse to live in fear. And we refuse to accept scraps. That’s why there have been so many strikes and protests this month,” said Dorothy Halvorson, a Walmart employee in Placerville, California, who has worked at the store for 11 years and plans to take part in civil disobedience today. “We know that we are closer to change at Walmart than ever before – and it’s clear that Walmart knows it too. We won’t stop protesting until we get change. This Black Friday is historic, and we will only grow stronger from here.”

In recent weeks, protesting Walmart workers have received an outpouring of national support. Calling for an end to Walmart’s illegal retaliation and attempts to silence workers who speak out for better working conditions, workers have walked off their jobs in a dozen cities, including Los Angeles, Seattle, Chicago, Ohio, Dallas, Florida, Washington, D.C. and elsewhere.

“The civil disobedience by Walmart workers and supporters across the country is a testament to the immense courage of these workers fighting for dignity, respect and a decent wage — the same things that working people have marched and rallied for in this country for decades,” said Rev. Jesse Jackson, one of America’s foremost civil rights activists. “The civil rights movement of the past called for workers to be free and equal. Walmart workers today are free, but far from equal. The company has lost its way, and it’s an honor to support workers taking this powerful moral action to get Walmart on the right path.”

Earlier this month, a photo from a Canton, Ohio store went viral, as workers, customers and commentators pointed to a food drive set up for Walmart’s own employees as proof that the retailer pays its workers poverty wages. And the federal labor board recently announced it would prosecute Walmart for widespread violations of its workers’ rights, providing additional protection for Walmart’s 1.3 million employees when they are speaking out for better jobs.

“As the largest company in the country, Walmart makes billions of dollars in profit while paying workers so little that many cannot afford Thanksgiving dinner. It shows a complete disregard for employees and their families,” said Rev. Ed Middleton, a pastor at First Community Church in Dallas, Texas who plans to risk arrest today. “The scope of today’s nationwide protests matches the outrage felt by Americans across the country. Walmart’s business model is morally indefensible, and we won’t stand for it.”

Since then, the company has been on the defensive. On Monday, when Walmart announced that Doug McMillon would replace Mike Duke as CEO, numerous business analysts highlighted that the incoming CEO would have to address Walmart’s failing business model and pay its workers more.

“I’m prepared to get arrested today for everyone who can’t stand up for themselves,” said Myron Byrd, a 45 year-old father of three who makes $20,000 as a full-time Walmart employee in Chicago. “I’ve never done civil disobedience before, but I know what it is. My mother participated in the civil rights movement, and always told me that if I saw something wrong, it was our job to change it. And that’s exactly what thousands of us are doing today – calling for change at Walmart and standing up for fair pay and better jobs.”

For updates and photos of Black Friday protests throughout the day, visit www.BlackFridayProtests.org and follow the conversation at @ChangeWalmart and  #WalmartStrikers.