In sit down with Sec. Clinton, retail workers talk about organizing and their fight for fair work practices

(LAS VEGAS, NV) – Today, Secretary Hillary Clinton met with hard-working retail workers from across the industry to discuss the  issues impacting them, their families, and co-workers.  During the meeting, the workers talked about their day-to-day challenges, including workplace intimidation, scheduling and unpredictable hours. The emotional visit with Clinton included workers from Albertson’s, Macy’s, El Super and Stater Bros.

The meeting with Flora Castaneda and Yolanda Pivaral, both El Super workers, was especially powerful as they highlighted the company’s ongoing intimidation and failure to recognize their right to negotiate a better life and a contract providing better wages and benefits. They have both worked to organize their stores and join the UFCW.

Sherry Hamilton, who works as a union representative at Macy’s, discussed that while UFCW  provides people with higher wages and protection, the non-union retail industry is still defined by unpredictable scheduling that makes it impossible to go to school, spend time with family, or have control over one’s life.

“I wanted Secretary Clinton to know how important joining a union was for me and my family. It’s the opportunity for a better life,” said Flora Castaneda, a UFCW member and worker at El Super. “I wanted her to know that companies like El Super need to do what is right and recognize our right to higher wages and benefits.” 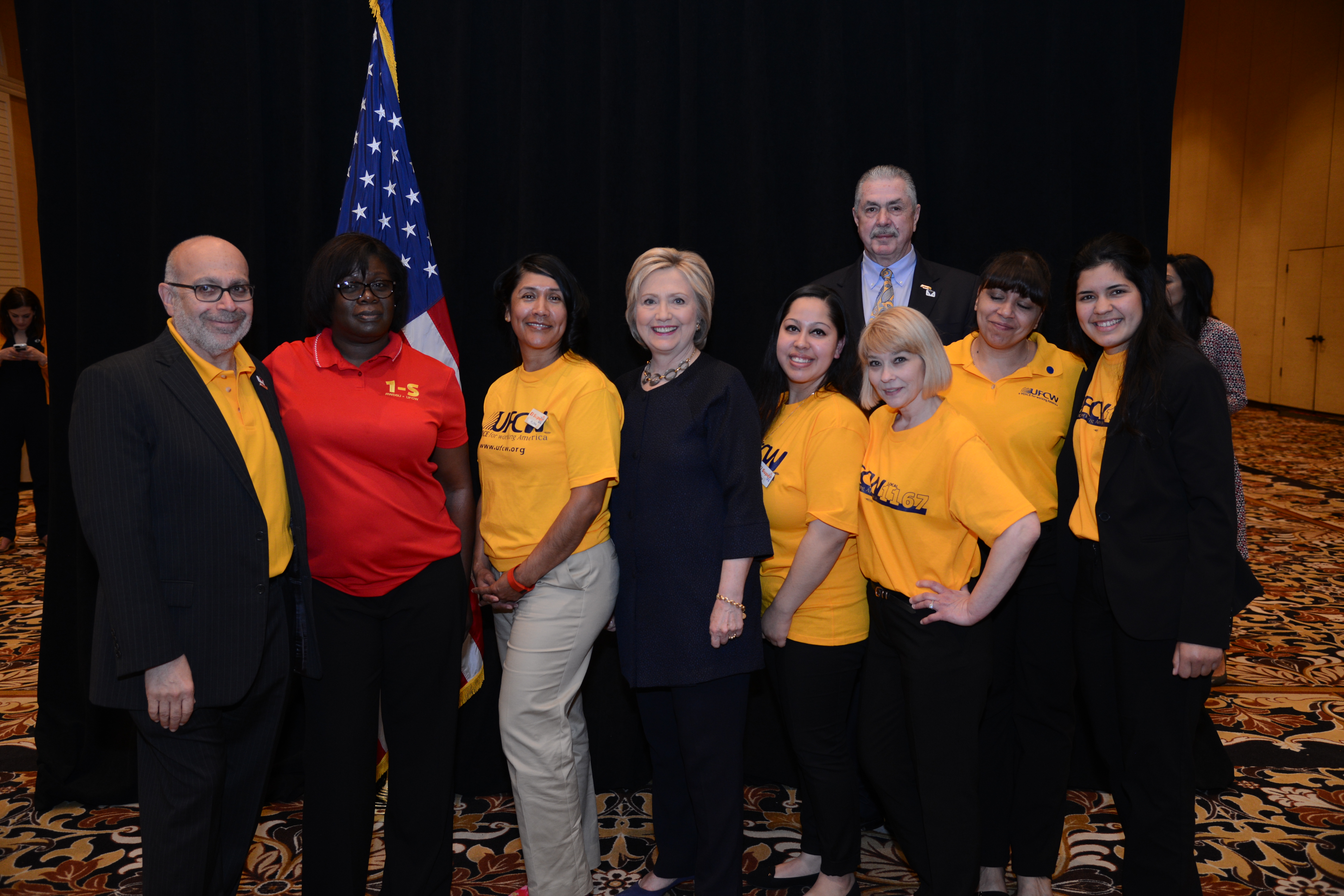 “I’m a working mom and I’m going to school,” said Yolanda Pivaral, a UFCW member and worker at El Super. “Without a predictable work schedule, it’s tough to coordinate child care and manage my classes. Secretary Clinton gets it. Workers in my store want a union contract so we can have the chance to shape our schedules. To have more control over my life would help me do my job better, manage my class work, and build a good life for my son.”

“Buying a wedding dress or a child’s first pair of shoes, these are big events and we work hard to make them special memories for customers,” said Sherry Hamilton, a Macy’s union representative. “I don’t think people realize how much havoc bad scheduling can have upon a worker’s life. By making work schedules in the retail industry more stable and reliable, we would be able to enjoy precious moments in our personal lives as well.”

“Our members endorsed Hillary because she is the only candidate who truly cares about the issues that matter to them. Regardless of what job a person does, Secretary Clinton is committed to making sure that people who work hard get the brighter future they have earned and deserve,” said UFCW International President Marc Perrone. “It speaks to Hillary’s character and her compassion that she doesn’t talk at our members, she listens to them.”

In January 2016, after surveying its membership across the country, UFCW endorsed Sec. Clinton. This is the second time Sec. Clinton has personally spoken with retail workers who are part of the UFCW. 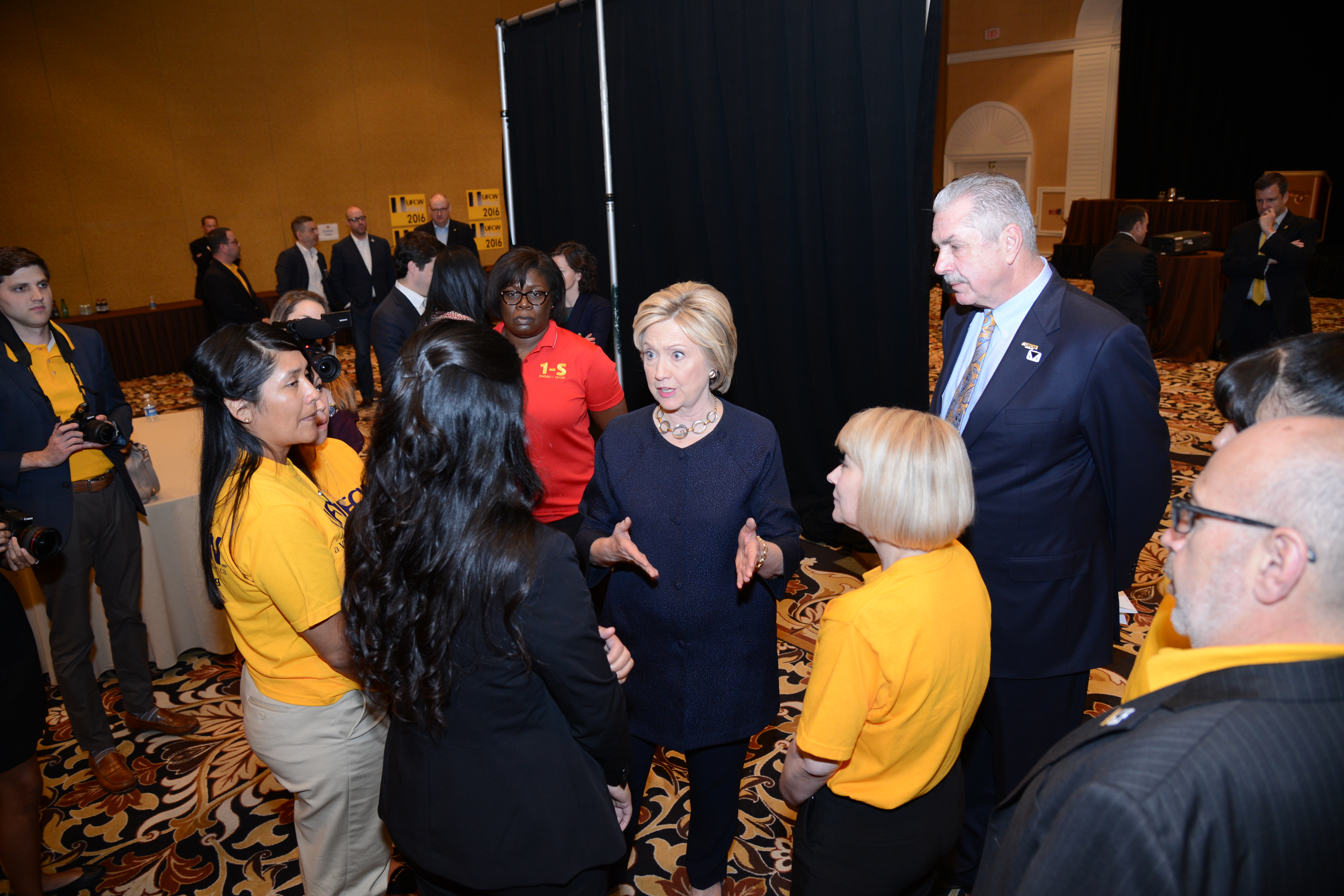 The retail sector is one of the fastest growing parts of the economy, but 40 million retail workers face challenges from erratic schedules, split shifts and part-time hours that make it difficult to live a stable life, manage a second job, or coordinate care for their families. These are common concerns throughout the industry and are a major reason why more and more retail workers are considering the benefits of joining a union. Earlier this year, UFCW announced it already had 100 organizing wins in 100 days, reflecting workers desire to work together to secure their lives and futures.

Yolanda Pivaral is 23, works at El Super Store #13 located in Los Angeles, CA and has been a cashier there for 3.5 years. She is a single mother to a six year old boy. She and her son live in Los Angeles. Yolanda is also furthering her education and is studying Communications at the California State University, Los Angeles. Yolanda has currently been getting more involved in her union. She has become trained and is now helping to do workshops to help make fellow union members US Citizens, through the Union Citizen Action Network.

Flora Castaneda 44, has worked as cashier at El Super Store #17 located in Los Angeles, CA for 12 years as a cashier. She is a single mother of three children. She and her children live in Los Angeles. Flora is a member of the bargaining team. She and her fellow co-workers have been fighting for over two years for adequate paid sick days, better wages, better benefits, more affordable health care, a fair seniority system, and respect.

Sherry Hamilton is 50, and was a sales associate at Macy’s in the Bronx for 17 years. After joining Local 1-S while working at Macy’s, she later joined the Local 1-S team where she now serves other Macy’s employees for the union.

UFCW is the largest private sector union in the United States, representing 1.3 million professionals and their families in grocery stores, meatpacking, food processing, retail shops and other industries. Our members help put food on our nation’s tables and serve customers in all 50 states, Canada and Puerto Rico.

Learn more about the UFCW at www.ufcw.org.