12 members of Congress call on DOJ and FTC to review Amazon deal, citing concern for low-income communities and food deserts 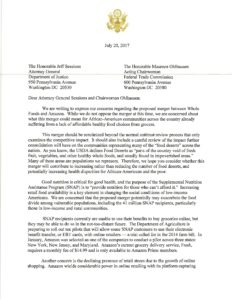 Click here to view the PDF and text of the letter signed by 12 members of Congress asking the Federal Trade Commission (FTC) and Department of Justice (DOJ) to review Amazon’s acquisition of Whole Foods.

WASHINGTON, D.C. — The United Food and Commercial Workers (UFCW) International Union, which represents over one million retail workers, released the following statement in response to a letter signed by 12 members of Congress asking the Federal Trade Commission (FTC) and Department of Justice (DOJ) to review Amazon’s acquisition of Whole Foods.

“Political concerns about Amazon’s acquisition of Whole Foods are growing for good reason,” said Marc Perrone, president of the UFCW. “Amazon’s monopolistic desire to control the retail market and replace good jobs with automation is not only a direct threat to the hard-working men and women at Whole Foods, it’s also a direct threat to our economy and consumers. Every member of Congress, regardless of party, must now decide whether they stand for an America with jobs, or Amazon’s America where millions struggle to find meaningful work.”

Earlier this week, on July 17, Perrone sent a letter to the FTC that explained why this acquisition is a threat to workers and should be reviewed.

In their letter to the FTC and DOJ, the 12 members of Congress called for Amazon’s acquisition of Whole Foods to be reviewed, saying: “This merger should be scrutinized beyond the normal antitrust review process that only examines the competitive impact. It should also include a careful review of the impact further consolidation will have on the communities representing many of the ‘food deserts’ across the nation.” The letter also cites, among other concerns, “the declining presence of retail stores due to Amazon’s growth.”

In recent weeks, several other policymakers and advocacy groups have voiced concerns about the acquisition, including:

The UFCW is the largest private sector union in the United States, representing 1.3 million professionals and their families in grocery stores, meatpacking, food processing, retail shops and other industries. Learn more about the UFCW at www.ufcw.org.