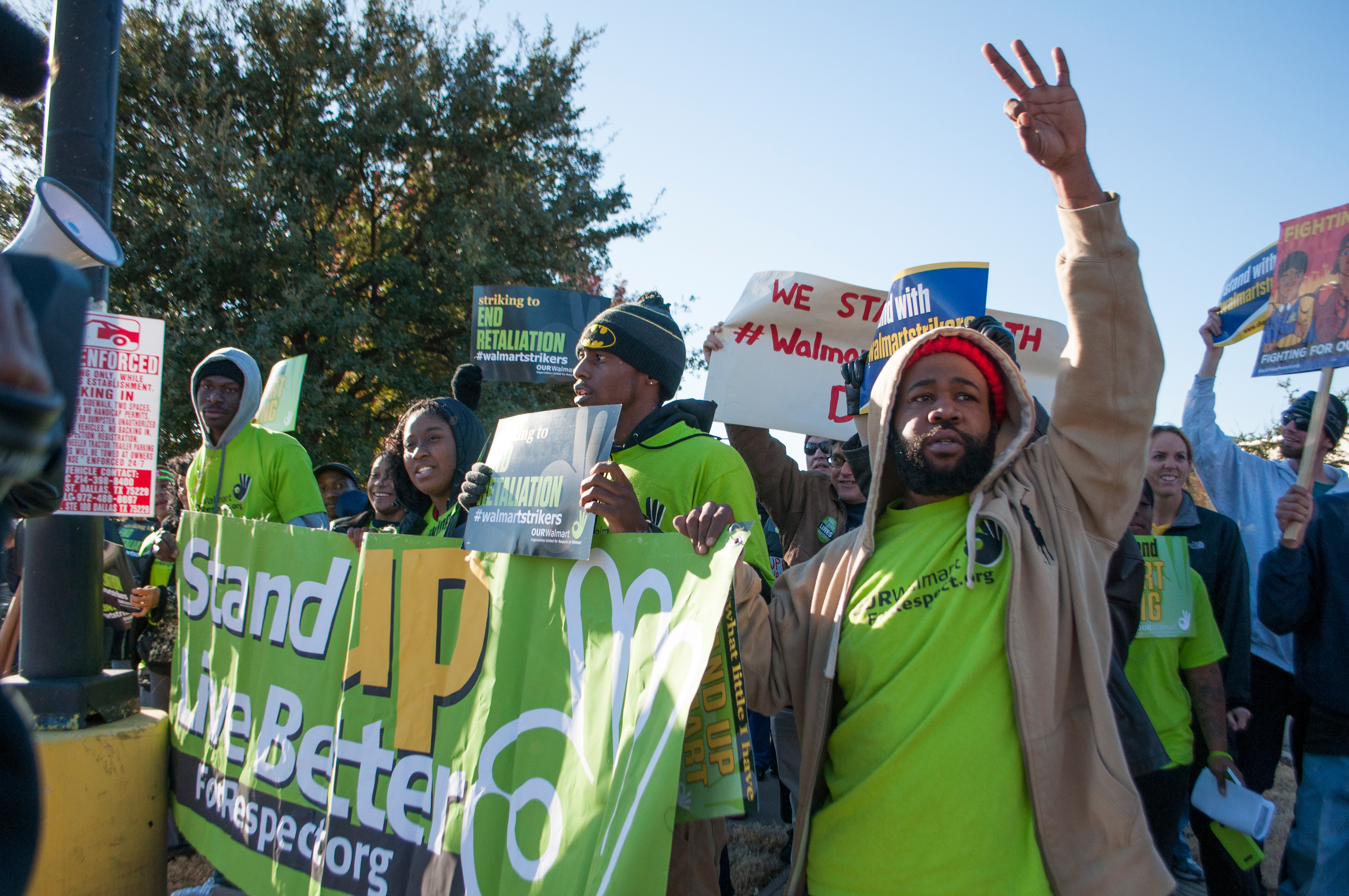 NATIONWIDE – Tens of thousands of Americans protested at 1,600 Walmart stores across the country on Friday, calling on the company to pay associates a minimum of $15 an hour and provide full-time work. The broad group said the country’s largest employer and the Waltons—Walmart’s majority owners—are abusing their power and hurting American families by allowing Walmart to violate workers’ rights. While the majority of Walmart workers are paid less than $25,000 a year, Walmart brings in more the $16 billion in annual profits; and the Walton family has built up nearly $150 billion in wealth.
Walmart workers—members of OUR Walmart—continued a nationwide strike protesting the company’s illegal retaliation against associates who speak out for better jobs.
In Phoenix, Sandra Sok walked off the job Wednesday for the first time and said: “Many of us are living in deep poverty and going hungry because the Waltons won’t pay us a fair wage. When my coworkers speak out about these issues, the company tries to silence us. For all of my brothers and sisters who have experienced illegal threats, I am on strike.” Sandy is paid only $400 every two weeks and has worked at Walmart for nine years.
Reports from protests around the country include:
·         Los Angeles: Walmart workers, on strike to protest Walmart’s retaliation, and community members are continuing a 24-hour fast outside a Walmart store in protest of the hunger that Walmart and the Waltons are forcing onto many of their families.
·         Washington, DC: A live band is gearing up to support striking workers outside the District’s new Walmart, where a group of workers held a sit-down strike on Wednesday. This is the first time that workers at the new store in Washington and in neighboring Virginia are on strike.
·         Albuquerque: A group of “Raging Grannies” will sing to show their solidarity with workers.
·         Denver: Santa Claus, his elves, Walmart workers and hundreds of community supporters are preparing to deliver a bag of coal to Walmart.
·         North Bergen, New Jersey: Members of the clergy are set to deliver a symbolic food bin to the store while chanting “dignity, not charity.”
Walmart workers started walking off the job on Wednesday in cities nationwide. Inspired by workers in Los Angeles who held the first-ever sit down strike in company history, associates in Washington, DC held a sit-down strike Wednesday at the new store on H Street. Workers in Washington, DC and Virginia are on strike for the first time and are joined by workers who walked off the job in cities and towns nationwide.
“The Black Friday rallies and demonstrations represent a dramatic escalation of the growing protest movement among employees of America’s largest private employer. But they also represent the vanguard of a sharp challenge to the nation’s widening economic divide and the declining standard of living among the majority of Americans,” Peter Dreier, Distinguished Professor of Politics at Occidental College, writes in the Huffington Post. “It is sometimes difficult to recognize historical events as they unfold, but it is likely that future generations will look at these Walmart protests as a major turning point that helped move the nation in a new direction, similar to the sit-down strikes among Flint auto workers in 1937, the Woolworth lunch-counter sit-ins by civil-rights activists in 1960, and the first Earth Day in 1970, which jump-started the environmental movement.”
“Our communities are suffering because Walmart won’t pay many of our neighbors enough so they can fill their stomachs,” said Nicole Ramirez from BAYAN – USA Pacific Northwest, an alliance of Filipino organizations. “I am out here with other Filipino youth and students supporting these brave Walmart workers who are on strike for their right to speak out. Our community is calling for $15 an hour and full-time work because we can’t let the Waltons abuse their power and destroy American families any longer.”
Growing pressure on the company to raise pay and provide full-time work comes as an increasing number of Americans and Walmart workers point to OUR Walmart as making significant changes at the country’s largest retailer. Since last Black Friday, the company committed to raise wages for its lowest paid workers, rolled out a new scheduling system that allows workers to sign up for open shifts and improved protections for pregnant workers in response to public calls from OUR Walmart. Workers at more than 2,200 Walmart stores nationwide have signed a petition calling on Walmart and the Waltons to publicly commit to paying $15 an hour and providing consistent, full-time hours.
The Walton family, which controls the Walmart empire, is the richest family in the U.S.—with the wealth of 43% of American families combined. While many Walmart workers are unable to feed and clothe their families, the Walton family takes in $8.6 million a day in Walmart dividends alone to build on its $150 billion in wealth.
Walmart workers began speaking out last week about the severe hunger issues that too many of them are facing because they can’t afford groceries. A group of workers started sharing their stories on Walmart Hunger Games Tumblr after reading about their co-workers’ struggles in a new analysis about Walmart’s role in reinforcing the hunger crisis in America.
For the past three years, Walmart workers have been raising concerns about persistent understaffing at stores and its impact on wasted food, un-stocked shelves, long check-out lines and lower sales, noting that better jobs at Walmart will improve customers’ shopping experience and strengthen the company’s bottom line. The company has reported losing up to $3 billion a year because its shelves go un-stocked. Consumers, analysts, shoppers and workers say that by improving jobs, Walmart can mend its reputation with shoppers, grow the business and help workers support their families.
###
UFCW and OUR Walmart have the purpose of helping Walmart employees as individuals or groups in their dealings with Walmart over labor rights and standards and their efforts to have Walmart publicly commit to adhere to labor rights and standards. UFCW and OUR Walmart have no intent to have Walmart recognize or bargain with UFCW or OUR Walmart as the representative of its employees.

UFCW Immigration Work will be Honored in September