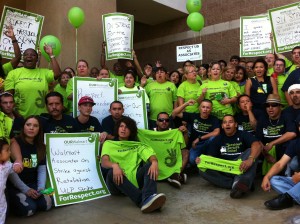 Thousands of Walmart associates across the country have joined together in OUR Walmart, a worker-led organization that stands up to make change in their company. For more than a year now, associates have been working together for a company that pays a living wage, provides affordable health care, is a contributing member of communities and treats their associates with respect. Instead of listening and working with OUR Walmart members, Walmart has retaliated against workers and tried to silence them.

On Thursday, October 4, these workers responded to Walmart’s refusal to treat its employees with fairness by going on strike at several Los Angeles-area stores. The strike is a protest of Walmart’s attempts to silence and retaliate against associates who speak out.

Today’s actions by Walmart associates are part of a growing movement of Walmart workers who are standing together and taking action.  Workers at Walmart-controlled warehouse and distribution centers in California and Illinois struck their employers over the last two weeks to demand an end to retaliation for speaking out for real change at work.

“The more than a million members of the UFCW across America know the need for real change at Walmart,” said Joe Hansen, International President of the UFCW. “We’re incredibly proud to stand shoulder-to-shoulder with these courageous associates who are taking action to demand that Walmart workers can, and should, be able to speak out for real change without fear of retaliation.”

To join with UFCW members and supporters from across the country and stand up for the rights of Walmart workers, click here or sign the petition of support below.

“Making a change for the better at America’s largest retailer can improve America’s middle class, America’s economy and America’s most common job,” said Hansen. “These brave workers have lit a fire for justice at Walmart that will be hard to extinguish.”