WASHINGTON – September 6 – One hundred Walmart workers and community members were arrested in 11 cities Thursday calling on the employer to reinstate illegally fired and disciplined workers, publicly commit to improve jobs and end the company’s aggressive violations of workers’ rights. Thousands of supporters, including the President of the National Organization for Women, Terry O’Neill, joined the group in 15 cities in the largest mobilization since Black Friday in 2012. In response to Walmart’s inaction, the group announced widespread, massive strikes and protests for Black Friday in 2013. The group made headlines last year on Black Friday with the largest strike in the company’s history. 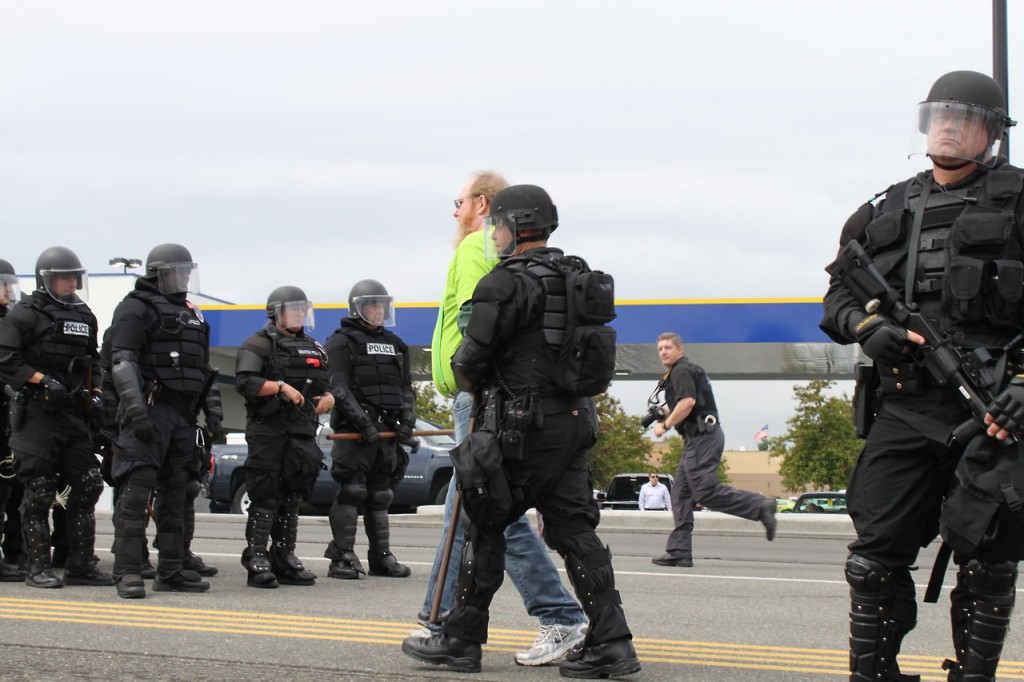 Workers and community members protested in the following cities on Thursday:

The arrests and protests come in the heat of national calls for better wages in low-paying jobs. “Enough is enough,” said Venanzi Luna, a worker who was arrested in Los Angeles, where hundreds of protestors marched in downtown Los Angeles. “Walmart continues to put us in an impossible position, and people are finally standing up for what’s right. I’m willing to do whatever it takes to make sure we’re heard. We’ll be out in even greater force on Black Friday.”

Similar protests across the country drew hundreds of workers and community supporters, including in the Washington, DC area where protesters shut down one of the busiest streets in Prince George’s County.

“We’ve had enough of Walmart’s inaction,” said Tonya Cauley, a Walmart worker who was arrested Thursday in Hyattsville, Md. “As the country’s largest employer, Walmart can and should do better. We aren’t calling for much—a minimum full-time yearly wage of $25,000 and assure us that we can stand up for what’s right without being attacked. I’m energized by the support I saw today and will be out stronger than ever on Black Friday.”

Economists, labor market expertsand others have been increasingly voicing concern about the growing income inequality and its impact on the economy. Walmart, the largest company on the Fortune 500 list, made $16 billion in profit last year and the majority of owners of the company, the Waltons, have the combined wealth of nearly half of American families. Meanwhile, many Walmart workers continue to earn on average poverty wages of $8.81 an hour, despite misleading claims from Walmart that wages are higher. A Congressional report released earlier this year calculates the Walmart workforce reliance on public assistanceincluding food stamps, healthcare and other needs is estimated to utilize $900,000 per year of taxpayer funds at just one of the company’s 4,000 stores.

“As the nation’s largest employer, Walmart and the Walton family should be raising standards, not lowering them. To whom much is given, much is expected,” said Kim Bobo, Executive Director of Interfaith Worker Justice. “Walmart should share its prosperity with workers and publicly commit to paying workers $25,000 a year for full time work, as the courageous Our Walmart workers are demanding.  If Walmart workers earned living wages the entire economy would benefit.”

A report from the national public policy center Demos shows that better jobs at Walmart and other large retailers would even help the store’s bottom line, as well as have an impact on individual families and the larger economy. A wage floor equivalent of $25,000 per year for a full-time, year-round employee for retailers with more than 1000 employees would lift 1.5 million retail workers and their families out of poverty or near poverty, add to economic growth, increase retail sales and create more than 100,000 new jobs.

Rather than providing good jobs that American workers need and deserve, Walmart is trying to silence workers who are standing up with their co-workers to live better and spending its time and money trying to deny workers a decent day’s pay.  But ongoing labor mismanagement concerns, including Walmart’s inaction on ending illegal retaliation, improving jobs at stores and putting meaningful protections in place at its suppliers, have contributed to record-levels of votes against Walmart Board of Directors and even shareholder divestment this year.

Since June, Walmart has illegally disciplined nearly 80 workers, including firing 20 worker-leaders. More than 100 Unfair Labor Practice charges have been filed with the National Labor Relations Board (NLRB) against Walmart. Workers in California recently announced that after an investigation, the NLRB regional office found that Walmart committed 11 violations of national labor law.

Venanzi Luna and Tonya Cauley are members of the growing national organization OUR Walmart. OUR Walmart, or Organization United for Respect at Walmart, formed just two years ago, when 100 Walmart associates came together to voice their concerns about the companyretaliating against those who speak out for better working conditions. With thousands of members across the country, the group organized the first strikes in company history last year and helped bring more than 30,000 supporters to protest at stores on Black Friday in 2012.

Making Change at Walmart is a campaign challenging Walmart to help rebuild our economy and strengthen working families. Anchored by the United Food & Commercial Workers (UFCW), we are a coalition of Walmart associates, union members, small business owners, religious leaders, community organizations, women’s advocacy groups, multi-ethnic coalitions, elected officials and ordinary citizens who believe that changing Walmart is vital for the future of our country.